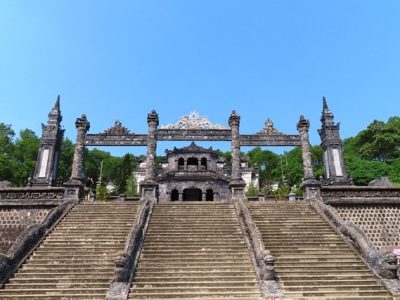 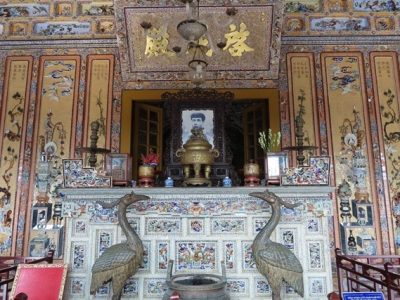 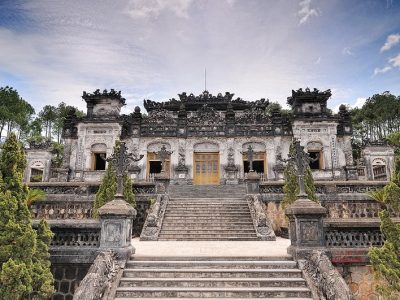 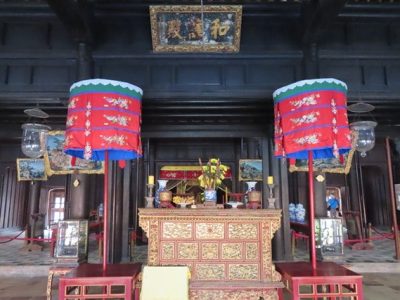 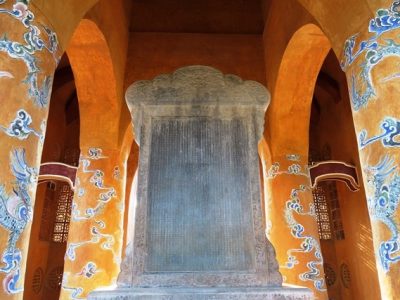 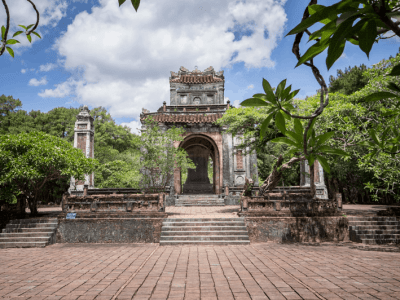 As you know, all of the Nguyen Dynasty emperors in Hue imperial palace (hue citadel), thought that. This life is just a temporary life. When you died, you would live a real life. So what they needed in this life, they would need them in the after-life. So all of the emperors, the first thing they did when they first came to the Throne is to order the Fengshui tellers to go around the country to choose the best Fengshui places to build the tombs. Everything inside the Royal Tombs Hue had never been used in the past, only for their after-lives. So book the Hue Royal Tombs Tour at Culture Pham Travel to have a great tour; unforgettable memory, and stories that you could not find in any history books.

Picking up at your hotel in Hue city center. We start the Hue Royal tombs in Hue. Our tour guide and driver will take you to the first tomb. The tomb of Minh Mang Emperor, who had 600 concubines, 142 children, and 78 sons. It is such ornate tombs and meaningful tomb with a lot of stuff (PRE- prepared while he was still alive). The Royal tomb of Minh Mang leaning on the mountains and faces to the head of Perfume River. Our tour guide will tell you a scary secret that might not in the guide books or on the internet.

After the beautiful Minh Mang Tomb, we will go to explore the Khai Dinh Tomb. The tomb of 12th Emperor of the Nguyen dynasty, Khai Dinh Emperor. That is the smallest tomb but it has as known as the most expensive and beautiful tomb in the tomb system of the Nguyen dynasty and over the World. Therefore, nowadays, it is one of the new wonders of the world. You would say twice “WOW, WOW” I promise you.

Last but not least in the Hue Royal tombs Half-day tour, we will visit is the royal tomb of the 4th Emperor of the Nguyen Dynasty, Tu Duc Tomb. Constructed between 1864 and 1867, it is the most popular and impressive of the royal mausoleums. Tu Duc Emperor designed it himself to use before and after his death. The enormous expense of the tomb and the forced labor used in its construction spawned a coup plot that was discovered and suppressed. Tu Duc’s tomb is 5km south of Hue on Van Nien Hill in Duong Xuan Thuong village. Our tour guide will tell you more and more about the Emperor’s life and his sadness.

On the way to get back to your hotel, we will have a chance to stop by at Incense making village to learn how to make incense and frankincense by hands with the locals. You will keep what you made as a souvenir. We finished the Hue Royal Tombs Tour – Half day.

Bach Ma national park- trekking trip is the tour for people who love wild-life and trekking into the jungle to enjoy wonderful views and admire nature.

Dinner on Dragon boat on Perfume river is a romantic dinner for the couples who would like to have a special dinner with beautiful views and enjoy the specialties in Hue imperial city.

This is a high-quality group tour and it is covered all highlights in Hue city in one day. This tour is perfect for the people who don’t have much time in Hue.

This City Private Tour is the perfect tour for you to understand and enjoy the history of the Nguyen dynasty. It is covered almost the highlights in Hue imperial city.

If you stay in Da Nang and really love Vietnamese history, interesting information about Emperors, concubines, eunuchs. You should book the Hue City Tour from Da Nang at Culture Pham Travel.

Hue city tour half day is the perfect city tour for people who don’t have much time in Hue but still want to visit highlights in Hue city.

Hue countryside tour is a 3-day tour in Hue to explore the real rural life, soul and culture and also a great chance to live with the ancient history of Hue.

Hue cycling tour to Thanh Toan bridge is a great chance to escape the bustling city of Hue to the real rural village, explore the old bridge, early morning market, and Hue countryside.

Hue city tour by cyclo- a slow way to discover Hue. Get on the cyclo to explore Dong Ba market, the Citadel, Royal antique museum by your real eyes.

Hue Pagoda- Buddhist tour is a private tour to visit the most famous pagodas in Hue with wonderful architecture, stories, as well as the holy spirit life.

This is a great group tour to visit the most beautiful, famous and expensive tombs in Vietnam and the world. The tomb is like the journey of the emperor from this life to enter into the after-life. Let’s explore them with Culture Pham Travel.

Hue street food tour is a great chance for you to taste a lot of specialties at many different local food restaurants in Hue. Taste local foods and drink local beers.

Hue To Hoi An By Jeep Via Hai Van Pass

Hue to Hoi An via Hai Van pass by jeep is a private transfer stop at fabulous places like Lap An lagoon, Elephant Springs, Lang Co beach, Marble mountains.

Hue To Hoi An By Motorbike- Private Tour

Hue to Hoi An by motorbike is the private transfer by motorbike via Hai Van pass, Lap An lagoon, Lang Co beach and Marble mountains to enjoy great views

HUE TO HOI AN STOP AT CITY OF GHOSTS

Hue to Hoi An stop at City of Ghosts is the Private Transfer with our English speaking drivers. As you can wish, on the way to Hoi An, we will stop by at the must-see attractions for you to take fabulous photos.