Tomb of Tu Duc Hue, Vietnam (also known as Khiêm Lăng) is one of the 7 appealing mausoleums on the outskirts of Hue imperial city. It lies in a wonderful pine valley of Duong Xuan Thuong Village (Thuong Ba Hamlet, Thuy Xuan Commune), about 8 km away from Hue city.

Although he was expertise in philosophy, oriental history, and literature, he did not succeed in ruling the country. Especially in the period of Vietnam encountering western developing capitalism.

Having no children to carry on the family line. Tu Duc was very sad so he ordered the construction for himself a fairyland. It is not only a world for his everlasting life after death, but it was also his lifetime recreation ground. Tu Duc Tomb Vietnam is the place where he could compose poems, hunt little animals, but also comfort himself with his concubines.

However, as the end of the construction, the emperor seemed to be inspired by humility. He added the word “Khiem” (“modesty”) to all the names of constructions in the complex.

What to see at The mausoleum of Tu Duc Emperor?

Entering the tomb of Emperor Tu Duc, walk to the North about 400 feet by a path made of the fine Bat Trang ceramic tiles. There is a beautiful lake on the right. There are two pavilions on the nearshore, namely Du Khiem boat landing and Xung Khiem pavilion. 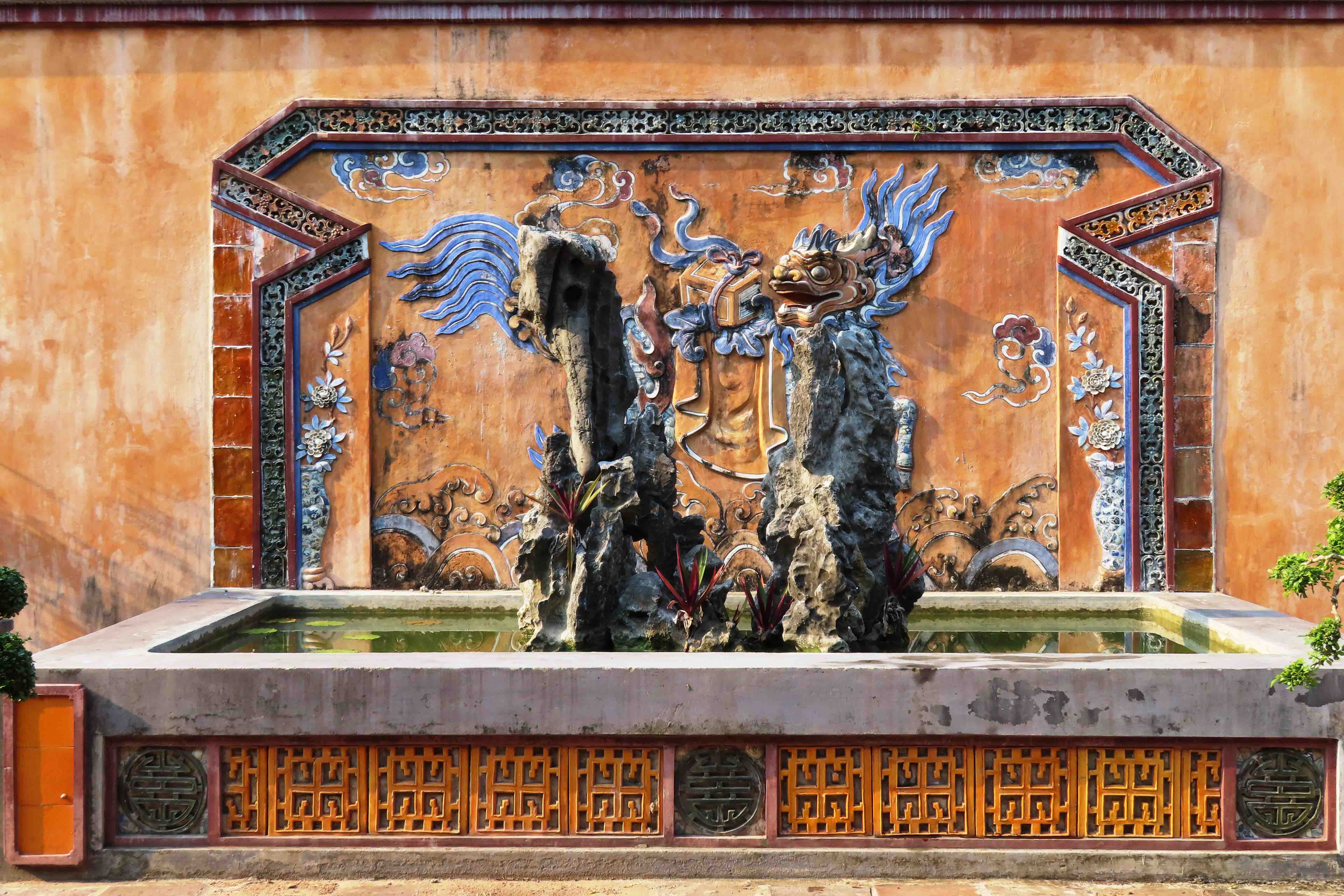 Du Khiem’s boat landing was designed for the emperor to disembark after his hunting trips to Tinh Khiem island in the middle of Luu Khiem lake.

From Du Khiem boat landing, if you walk to the North about 100 feet, then take a left turning and walk 100 feet due east to reach the pavilion. It is a pavilion where the emperor could sit at his leisure with his concubines, write verses and read their compositions.

Khiem Cung gate, opposite Du Khiem boat landing, leads into the courtyard in front of Hoa Khiem Palace, the emperor’s residence when he was visiting. After his death, the palace was switched to a temple where the emperor’s memory was worshipped.

There is a lot of ancient stuff of the emperor in the tomb, such as the Western clock from the French government and two thrones. One interesting fact is that Tu Duc was considerably smaller than his empress, so he used to occupy the smaller one.

The temple located directly behind Hoa Khiem palace was a center of worship for the departed soul of Tu Du, the emperor’s mother.

It is standing behind and to the right of Hoa Khiem Palace, which is the second Royal Theater for the emperor and his retinue to entertain.

You may have a chance to dress up as the emperor (and his empress) to take some fascinating souvenir photos. Moreover, the staff is also closeby and ready to pose as mandarins in the pictures.

Following the brick path outside the Khiem Cung gate, walking about 500 feet to the Northwest till you reach the forecourt in front of the stele pavilion.

On the Royal Courtyard, there are 2 rows of sculptures of horses, elephants, and mandarins. Because of the Emperor’s constitution so the mandarins statues could not be taller than him. They are there on the Courtyard, waiting for the emperor to do business in the after-life.

Walking on the court-yard in the middle of the honor guards. You’ll reach the first building in the necropolis, a stele pavilion. This accommodates a 22-ton stone stele, the largest one in Vietnam. It inscribes the emperor’s biography and his fault to the Royal family as well as the country.

Plus, two pillars flank the stele pavilion– these obelisks are common sights in royal tombs, as they represent the candles showing the emperor the right way to enter into the afterlife.

Walking 200 feet to the west, you’ll reach the final point in the necropolis. The Buu Thanh brick wall that encircles the emperor’s sepulcher. The tomb, almost alone among this imperial tomb’s structures, designed in a simple and modest style.

Actually, the emperor is not buried under this tomb. Instead, when Tu Duc passed away, he was buried secretly somewhere in Hue. So the location of the emperor’s coffin is still a mystery until now.

As you know, Kien Phuc, Tu Duc’s adoptive son grave is in Tu Duc’s tomb complex as well. His grave occupying a small area about 500 feet to the North of the Xung Khiem pavilion. Moreover, Tu Duc’s empress is also buried across the lake, 500 feet to the west of Kien Phuc’s tomb.

How to get to Tu Duc Royal Tomb Hue?

There are many ways to get to the Tomb of Tu Duc Emperor, including booking a grab bike, catching a cyclo, taking a boat trip or walking. Another fantastic way to hugely enjoy the site is to book a Private City Tour via Culture Pham Travel.

Besides, remember to wear sunglasses, hats, and sunscreen as well as bring bottles of water in the dry season. Furthermore, prepare raincoats or bring umbrellas in the wet season for full enjoyment.

You can get more information about beautiful landscapes and Unesco monuments in Hue such as Thien Mu Pagoda Hue, Hue Imperial City… on our website.